At lunch the other day, one of my friends said she’d heard that dogs have ten times better eyesight and 100 percent better hearing then we humans. I had to chuckle to myself. Though the senses of our canine and feline companions are amazing when compared to our own, there are still quite a few myths about them. Dogs and cats have the same five senses as humans, but some are more highly developed than ours, while others are less so.

Both dogs and cats do excel in sight compared to humans. For example, their night vision and ability to detect movement exceed our own. You may have noticed that their eyes are placed toward the sides of their skulls, giving dogs and cats an incredible range of vision—sometimes up to 270 degrees. The visual perception of felines is anywhere from 20/100 to 20/200, which means a cat at 20 meters can see what an average human can see at 100 or 200 meters. Cats tend to be nearsighted and have better near-vision than dogs, meaning they cannot see far objects as well canines. This helps with their ability to hunt and capture prey.

Have you ever wondered if your pet can see colors? They can, but in a limited capacity. For example, the human eye has three types of cones for identifying combinations of red, blue, and green. Cats and dogs only have cones for blue and yellow, meaning their perception of color is more muted (similar to color blindness in humans). Also, because they are not sensitive to red light, they have difficulty distinguishing some colors. Red appears dark brownish-gray or black, while yellow, orange, and green all look a bit yellowish. Our furry friends see blue quite well—which is great since it’s one of my favorite colors—but purple looks the same as blue to them. Dogs can’t tell the difference between a red ball and a yellow ball when they play fetch, but luckily they have a great sense of smell so they can usually identify what ball is theirs, avoiding mix-ups at the park. It’s fun to look at photos that show how our pets see verses how we do. Check it out: how cats see the world and how dogs see the world. 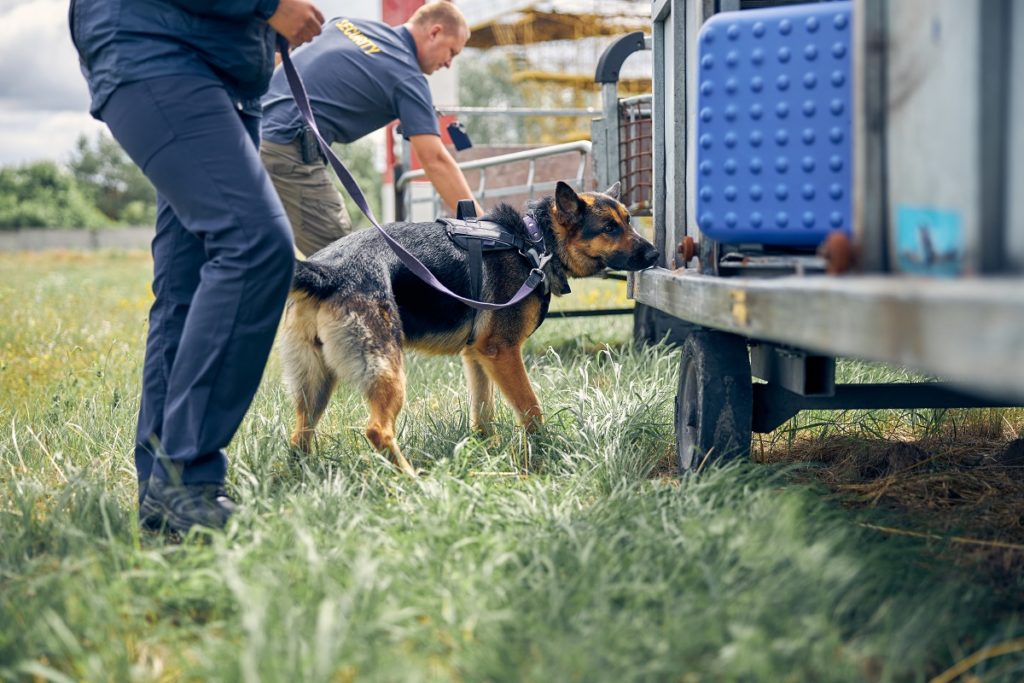 Our sense of smell is no competition to a dog’s or cat’s. Humans have only 5 million odor-sensitive olfactory receptor cells. Meanwhile, felines have around 50 million to 80 million. Canines, depending on the breed (bloodhounds win the prize) have a whopping 200 million to 300 million. To put this into perspective, a cat’s sense of smell is roughly 10 to 20 times keener than ours, whereas a dog’s is tens of thousands of times more sensitive.

All humans have a unique scent that allows dogs to tell one person from another, so they don’t need to see us to identify us. Their sense of smell is so proficient that a blind dog can adjust to  vision loss with much less difficulty than humans. Besides being able to sniff out who is who, dogs can also sense fear, anxiety and even sadness.

Adrenaline, known as the flight-or-fight hormone, is undetectable by the human nose, but it’s thought that dogs can smell it. They can also detect cancer cells, explosives, and drugs. Furthermore, by using their powerful sense of smell along with a part of their brain that analyses and processes scents, they can track and find lost people or animals.

The daughter of a friend of mine uses a diabetes alert dog to detect the early stages of low blood sugar before it can become too dangerous—it turns out that distinct odors accompany different levels of blood sugar. There are even some studies showing that dogs can be trained to detect COVID-19.

With such a heightened sense of smell, you might think there would be some odors our pets just don’t like along with some they gravitate to. We tend to be baffled when our dogs roll around in the muck or our cats sleep on foul-smelling shoes. When it comes to canines, they prefer smells that humans typically find unappealing—particularly the smell of rot. Yet they’re attracted to the smell of a decomposing animal carcass, an open garbage bag, or a pile of rotting leaves. I’m sure you’ve seen your dog rolling in something in the yard, and you know it is never a good thing.

Felines find certain plant odors appealing, the most common example being nepetalactone from catnip (Nepeta cataria). The effect of catnip is due exclusively to the smell rather than the taste. Researchers suspect that catnip targets feline “happy” brain receptors. Other scents cats like are olive oil, chamomile, roses, daisies, and lilies (However, be careful around flowers. Cats may like the smell, but they definitely shouldn’t eat them. Some flowers are toxic and cause major health problems or even, in some cases, death.)

Knowing what odors make your pet want to run away and hide is important in reducing their stress and increasing their overall happiness.

Dogs cannot stand the smell of:

Cats cannot stand the smell of:

The next time you decide to burn a candle or use essential oils, make sure you take these smells into consideration.

Although dogs can claim a superior sense of smell, when it comes to hearing, cats win out. The feline sense of hearing is considerably more sensitive than dogs, humans, and indeed many other mammals.

It’s no surprise that canines and felines move their ears to detect where a sound is coming from, but you may not know that they also express emotion with ear movement. Dogs have 18 muscles in their ears that facilitate movement, and they can hear frequencies up to around 45,000 hertz.

Cats have an even greater range of movement with 32 ear muscles, allowing them to rotate their ears 180 degrees. They can also hear at a much higher frequency than dogs—up to 100,000 hertz. Some cat owners may argue their cats never hear them, but it’s more likely that they’re being ignored. Japanese researchers have found that cats can distinguish their owners’ voices from those of other people, implying that cats simply prefer not paying us any attention, no matter how much we speak to them. Cats do respond more strongly to the sound of their own names than to other words in a series.

On the other hand, the ability of dogs to communicate with humans is unlike any other species. They can sense our emotions, read our facial expressions, and even track our pointing gestures. There are studies suggesting that humans and dogs listen to speech similarly: we both respond to the vocalization (what is being said) and emotional tone (how it is being said). 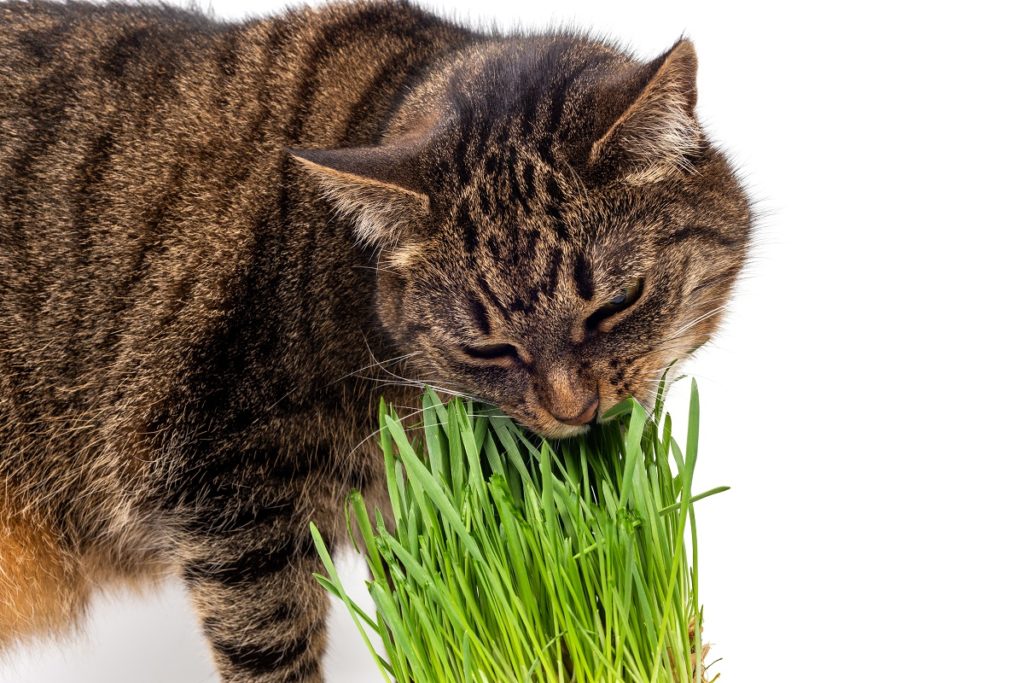 Born deaf and blind, touch is the first sense that dogs and cats have after birth. They rely on the touch of their mothers and siblings to find milk and a safe place to sleep. Even once they gain their sense of hearing and smell, they will still rely heavily on touch throughout their lives.

Cats are gifted with a highly sophisticated sense of touch, much of it routed through their facial whiskers and the carpal vibrissae located on the backs of their front legs. Therefore, whiskers and paws do the analytical work in a cat’s world. Some cats are so sensitive that they don’t like being touched or scratched. When petting or touching your cat, keep in mind that most felines enjoy being touched at the base of their ears, under their chin, and around their cheeks—all regions where their facial glands are located. These places are usually preferred over the tummy, back, and base of their tail.

Dogs continually use their sense of touch to communicate with other dogs and with you. Physical affection, petting, scratching, and massage are all positive and important ways to connect to your dog through touch. Humans can smile, but dogs wag their tails and cats purr.

Humans have roughly 9,000 taste buds. However, dogs only have about 1,700 taste buds and cats approximately 470. Cats and other carnivores also have different taste classifications than humans, and as a result they taste and smell their meals quite differently. Studies show that dogs have the same four taste classifications as humans: sweet, sour, salty, and bitter. Dogs also have special taste buds geared specifically for water. These are found at the tip of the tongue, where it curls as they lap water. Although these taste buds react to water at all times, they’re more sensitive after the animal eats salty and sugary foods. The theory is that animals in the wild might need more water after eating foods that dehydrate them.

Tracie Hoffman is a veterinary technician with over 20 years of experience. She is able to use her knowledge of conventional veterinary approaches and her expertise in whole food nutrition to create better options for doctors and their staff. Although she is most present with Colorado Standard Process West clients, Tracie offers assistance via phone and email throughout the region. She hosts lunch and learn programs, reviews cases, provides protocols and assists clinics with start-up, client education and advertising. She has also developed a number of complementary veterinary reference aides, available from SPW. If you would like to contact Tracie, please email her at THoffman@standardprocesswest.com.

Tracie Hoffman is a veterinary technician with over 20 years of experience. She is able to use her knowledge of conventional veterinary approaches and her expertise in whole food nutrition to create better options for doctors and their staff. Although she is most present with Colorado Standard Process West clients, Tracie offers assistance via phone and email throughout the region. She hosts lunch and learn programs, reviews cases, provides protocols and assists clinics with start-up, client education and advertising. She has also developed a number of complementary veterinary reference aides, available from SPW. If you would like to contact Tracie, please email her at THoffman@standardprocesswest.com.