Honey has been valued by humanity since ancient times, as cave paintings from as far back as 8,000 years ago show. Today, we still consume this byproduct of flower nectar and the aerodigestive tract of honey bees not only for its sweet taste but also its therapeutic properties—just as many ancient civilizations did before us, including Greece, Egypt, China, and Rome to Maya, Babylonia, and India.

The Indian system of medicine known as Ayurveda prizes honey as nature’s most remarkable gift to humanity. Ayurveda is a combination of two words: ayus (life) and veda (a system of knowledge). Hence, Ayurveda translates to “a system of the knowledge of life.

The role of honey in the diet is measured by its various effects on the doshas, including how it can balance or unbalance them, depending on a person’s overall health and how the honey is applied.

Eight types of honey are described in the ancient texts of Ayurveda. The variety of the honey depends on the type of bee that produces it as well as its use in treating various diseases. These are as follows:

Makshikam: Collected by small bees, this honey is very light and dry in nature. Used in the treatment of eye diseases, hepatitis, piles, asthma, cough, and tuberculosis.

Bhraamaram: Collected by large bees and sticky in nature. Used when blood is in the vomit.

Kshoudram: Collected by medium-sized bees. Light and cold in nature, this honey is used in the treatment of diabetes.

Pauthikam: Collected by very large bees from the nectar of poisonous flowers. Used to treat diabetes and urinary infections, also acts as sedative and reduces fat.

Chathram: Heavy and cold in nature, this honey is useful in gout and leucoderma (shwitra).

Aardhyam: Effective for treating eye diseases, cough and anemia; may cause arthritis.

Ouddalakam: Useful in skin diseases and modulation of voice (swarashudhi), this honey is also used in leprosy and poisoning cases.

Daalam: Dry in nature; aids digestion and helps in treatment of cough, vomiting, and diabetes. 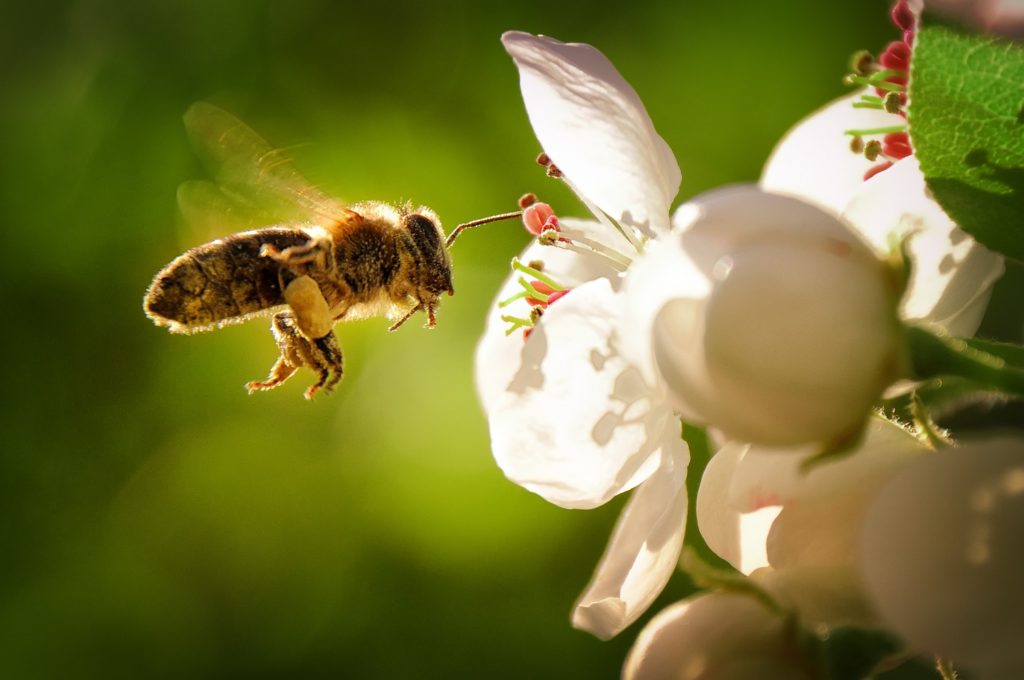 From the very beginning, Ayurvedic doctors (viadya) have invested much time and effort into the study of treating certain diseases with honey, generally using raw honey in their research. Ayurveda values natural, unprocessed honey collected directly from jungles. Though some form of processing is required to make the honey suitable for various diseases, no synthetic substance is added. The honey is minimally processed for storage and to make it the right consistency for treating various ailments.

There are a few different types of processed honey in the Ayurvedic tradition:

Comb honey: Harvested directly from the honey comb and stored as is.

Liquid honey: The wax capping is cut and the comb is processed in a centrifuge extractor.

Granulated honey: The honey is frozen and the water elements are separated, leaving behind honey granules.

Creamed honey: A blend of one part of granulated honey and nine parts liquid honey. Stored at 57°F until it becomes firm.

Chunk honey: Achieved by storing the comb honey in a jar and pouring liquid honey over it.

In ancient Ayurvedic texts, honey is known as madhu and is considered one of the most important medicines in Ayurveda. Honey is used in several ways: both internally and externally to treat diseases, as a natural preservative and sweetener, and in combination with certain medicines to both improve efficacy and balance side effects.

Let’s look at ten areas where honey can benefit our health and aid in the treatment of various ailments:

#1. Heart: Reducing inflammation is the most important effect of honey. Studies show raw honey contains flavonoids, polyphenols, and many other micronutrients that help boost the natural ability of the body to reduce inflammation. Plaque buildup in the arteries is reduced, which helps protect against a heart attack or a stroke. Traditional Ayurvedic experts recommend honey for cardiac pain and palpitation of the heart.

#2. Anemia: Anemia is characterized by deficient hemoglobin in the red blood cells, both in quality and quantity. Honey improves hemoglobin concentration, which is responsible for carrying oxygen from the lungs to the tissues. The body develops anemia when hemoglobin is unable to carry oxygen, and honey contains iron, copper, and manganese, all of which are responsible for building hemoglobin. Because honey helps maintain the right balance of hemoglobin and red blood cells, it is considered an effective treatment for anemia.

#3. Pulmonary health (related to our lungs): Honey is an anti-inflammatory that reduces inflammation in the bronchial tubes of the lungs, helping us breathe easily. Honey also contains a mixture of “higher” alcohols and ethereal oil; the vapors they give off are soothing and aids breathing in asthma patients. It’s also beneficial even if the air flowing over honey is inhaled or eaten. Ayurvedic experts recommend one-year-old honey to treat respiratory diseases.

#4. Skin: Ayurvedic scriptures prescribe the external application of honey. Due to its antibacterial, antifungal, and anti-inflammatory properties, honey is considered useful in treating wounds and sores. It aids fast healing and can also be used to treat acne. 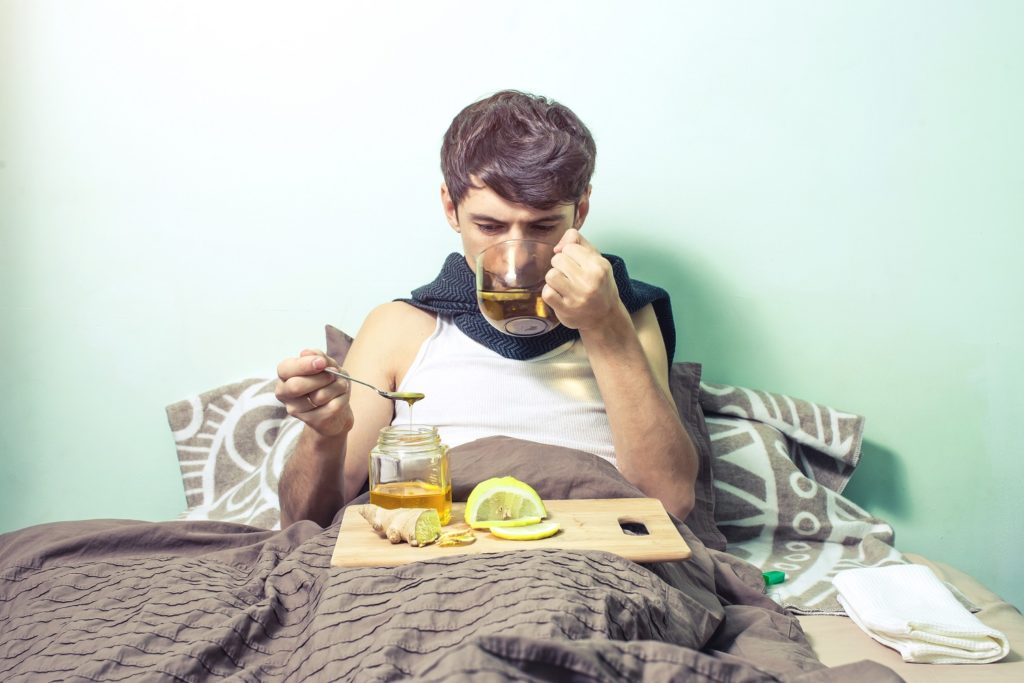 #6. Insomnia: Raw honey has sedative properties, and two teaspoons of honey in a cup of water before going to bed can help you sleep better.

#7. Oral health: According to Ayurvedic experts, honey is beneficial in keeping the mouth healthy and increases vascularity in your gums. In the case of ulcers, honey is known to aid healing and also prevent sepsis and pyogenic infections, which cause bad odor and pus formation. A gargle of honey water can treat gingivitis by decreasing inflammation in the gums.

#8. Eyes: Honey has been used for various eye ailments over the long history of humankind. Studies reveal that applying a little honey as an ointment under the lower eyelids can cause regression of certain diseases of the eye. It is also helpful in treating itching, trachoma, conjunctivitis, and other eye-related ailments. Honey is known to prevent glaucoma (damage to the optic nerve) in its initial stages, as well as other ailments such as blepharitis, keratitis, and more.

#9. Stomach: When fecal matter and undigested food are present in the alimentary tract, honey acts as a natural laxative and emetic and helps clear the digestive tract. Moreover, it tones up the stomach by aiding proper digestion. It may also help prevent stomach diseases. Honey checks the overproduction of hydrochloric acid in the stomach, thus providing relief from nausea, vomiting, and heartburn. Honey also helps peptic ulcers, gastritis, and gastroenteritis.

#10. Old age: Honey is even believed by some to increase lifespan. An ancient text mentions that honey, since it is easily digested, is especially useful in providing energy and heat to the body in old age. It dries up the phlegm, clearing the system of mucus, which is a main problem in old age. Two teaspoons of honey in lukewarm water is generally advisable.

Now that you have learned about the immense scope of honey to treat various diseases and its value in our daily lives, you should also know about some precautions to take before you use honey.

Raw honey, in addition to its immense advantages in our day-to-day lives, is a simple yet effective remedy in preventing and treating a variety of ailments. Using honey is not only beneficial in medical sense, but it’s also been an irreplaceable ingredient in foods from all around the world since ancient times.

Tejas Shahakar is currently the content manager at Raw Forest Honey. His experience as a content manager includes working on content related to all things ‘honey’. He is also a health and wellness blogger with a main focus on natural remedies and Ayurveda.

Tejas Shahakar is currently the content manager at Raw Forest Honey. His experience as a content manager includes working on content related to all things ‘honey’. He is also a health and wellness blogger with a main focus on natural remedies and Ayurveda.

2 thoughts on “10 Therapeutic Uses of Honey in Ayurveda”