The netting might be relatively opaque and difficult to see through, but you can be sure that there are millions of living honeybees riding on the trailer. When the truck says something about honey, bees, or apiaries, what’s riding is probably live insects. (Photo by Hackenberg Apiaries, used with permission from Dave Hackenberg, commercial beekeeper.)

The annual massive movement of honeybees toward southern California has begun. If you’re a traveler on our interstate highways, you may encounter an 18-wheeler loaded with hundreds of honeybee hives. You may not recognize it, but the trailer will be covered with a large net to contain the flying bees. Look closely and you’ll see that under that net are honeybee hives. Why is this hive movement necessary? In a word: almonds.

As Richard Waycott, CEO of the Almond Board of California, was quoted by the Sacramento Bee: “We would not have an almond industry if we didn’t have bees. . . . We’re joined at the hip with the beekeeping industry.”

A few essential facts about almond crops go a long way toward explaining why growers are so dependent on the beekeeping industry. Almonds are actually stone fruit eaten as nuts. The trees don’t tolerate wet soils, so they do very well in the central and southern portion of California. Coming into full bloom in February, almonds are the earliest stone fruit bloomers. They require cross-pollination, which means they fail to produce fruit if self pollinated (self-unfruitful) or if cross-pollinated with an incompatible tree (cross-unfruitful). This situation calls for honeybees. Or, if I could play a little superhero sound bite, “This is a job for Super Bee!” 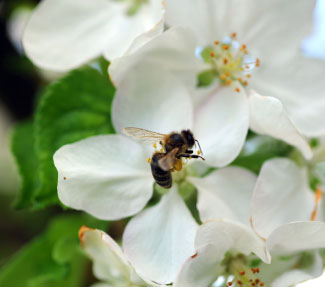 As explained in this article from Time, there are approximately 2.5 million living honeybee colonies in the United States today. Of those, about 1.6 million are needed (and necessary) to pollinate almonds in California. That’s 64 percent of all the honeybees in the nation needed in central and southern California for the February almond bloom. Furthermore, the number of almond trees is increasing.

Those honeybees will be coming from all over the United States. These living insects can survive a few days without additional food because they have honey and bee bread stored inside their hives. But while in transit, bees cannot survive extended periods without water. According to commercial beekeeper Jeff Anderson, depending on the humidity and the temperature, the driver may have to make multiple stops simply to find water for the bees (which is accomplished by spraying the whole trailer with water). This is why some border crossings provide fresh water sprays where the drivers can give the honeybees a drink along their route.

This is a tricky business for beekeepers. Before the almonds bloom, there’s little or no forage for the bees in the target area. On the one hand, they must be in California in time for the almond bloom. On the other hand, if they get there too early the honeybees may starve. Of course, artificial feeding is an alternative, but not ideal nutritionally.

Many of these hives will be placed in western Texas, New Mexico, and Arizona as a staging area before the short move to California. Sideline beekeeper Tom Theobald explains that the bees are moved to these staging areas starting in October and continuing through December. In January, they make the final move to the almond orchards. The bees must be there and ready to work in February.

A colony that’s ready to work is a colony with eight or more frames of bees. A good guess is about 3,000 workers per frame (including both sides). If we assume each colony is made up of approximately 24,000 workers, we need 38.4 billion honeybees to successfully pollinate the almond crop. That’s a lot of working bees.

All this planning, breaking down, loading, moving, setting up, feeding, watering, and contracting happens behind the scenes—rarely noticed or even thought of by the typical citizen. And yet every one of us is very much dependent on that work getting done. Even if you don’t eat almonds, you probably do eat some fruit or vegetable which these insects will pollinate later in the year.

It’s a ton of work to bring you the food you eat. The question is, what’s it worth to you?

Don Studinski, dba Honeybee Keep, is a permaculture enthusiast and member of the board of directors at Living Systems Institute (LSI) where he applies permaculture philosophy to beekeeping. Honeybee Keep manages Colorado’s first Certified Naturally Grown (CNG) apiaries: LSI in Golden and Cottonwood Farm in Boulder. As a beekeeping mentor, Don provides advice and counsel for students throughout the United States, teaches classes and performs public speaking events. He authored Beekeeping Mentor in a Book and writes extensively about beekeeping on his own website and for a variety of others, including Bee Culture magazine, Peak Prosperity and Honeybee Haven.

Don Studinski, dba Honeybee Keep, is a permaculture enthusiast and member of the board of directors at Living Systems Institute (LSI) where he applies permaculture philosophy to beekeeping. Honeybee Keep manages Colorado's first Certified Naturally Grown (CNG) apiaries: LSI in Golden and Cottonwood Farm in Boulder. As a beekeeping mentor, Don provides advice and counsel for students throughout the United States, teaches classes and performs public speaking events. He authored Beekeeping Mentor in a Book and writes extensively about beekeeping on his own website and for a variety of others, including Bee Culture magazine, Peak Prosperity and Honeybee Haven.