Released in 1929, Catalyn was the first multivitamin formula ever made. This article will explain the history and philosophy behind this simple, yet powerful, product.

Catalyn contains every nutrient the body needs to function. When it was introduced, researchers had not yet discovered most of the vitamins and minerals we’re familiar with today. Whenever a “new” nutrient is discovered, spectrographic analysis will often reveal that it is, in fact, Catalyn.

Dr. Royal Lee and Whole Food Nutrition
Dr. Royal Lee, a dentist and early pioneer in the field of nutrition, created Catalyn. Knowing it was unwise to attempt improving upon what God created, Dr. Lee didn’t seek to isolate any nutrient from its natural environment of food. Vitamins occur in foods as complexes of enzymes, trace minerals, and other synergistic nutrients—and it is only this form that your body can use. If you separate it from its natural cofactors, you take only a fraction of a vitamin complex, and your body must provide the missing parts from its own reserves. This creates a deficiency of these cofactors. Dr. Lee’s philosophy was to find the food source of a nutrient and concentrate that food down to a therapeutic dose.

As a dentist, Dr. Lee noticed that most of the chronic dental problems he encountered were a result of nutritional deficiency. From this fact, he concluded that poor nutrition was likely the cause of other health problems as well. In 1926, he set out to create a food concentrate that would include all the nutrients necessary for the body to function. For three years, he sought out foods that, when combined, would provide the body with all of these micronutrients—not just those known of at the time.

Lee also invented a method of drying and concentrating these foods into pill form without heating them above body temperature. He understood that for foods to be useful, they needed to be alive—with all their enzymes and other heat-sensitive nutrients intact. Enzymes start to denature, or die, at 120 degrees Fahrenheit. For this reason, the ingredients in Catalyn are never heated above body temperature. Lee’s patented low-heat, vacuum-drying process takes the water out of the foods, and does so without destroying the nutrients. This means that Catalyn, unlike nearly every other vitamin product, is a living food. Its vital energy is intact. In Chinese medicine, the energy of a food is at least as important as its physical nutrients. It’s a given that eating denatured or highly processed food is not nearly as beneficial as eating the whole food. Catalyn’s worth as a multivitamin derives from the fact that it is a whole food concentrate.

Most of the ingredients in Catalyn are organically grown vegetables and grains. Dr. Lee, who understood that the trace minerals from the soil were the most important to the body, said, “Whole food nutrition begins with the sun, water and fertile soil.” For this reason, he wanted to grow his foods on the richest, most fertile soil in the country. Wherever he found it, that’s where he would build his farm. The Kettle Moraine in what is now Palmyra, Wisconsin, gave him exactly what he was looking for. The soil there has a rich supply of trace minerals, left from glacial erosion. Farmers water the crops from an artesian well that taps pure glacial water 580 feet below the surface, and they use no chemicals on the land. In fact they’ve never used chemicals to farm the land. It’s a tragedy that there’s very little land left in this country that can make that claim. Most organic farms are converted conventional farms that were once sprayed and thus depleted of their precious supply of trace nutrients.

Dr. Lee felt that deficiencies of trace minerals—minerals present in very small quantities—were the key to most chronic health problems. To compensate for this lack, he recommended taking three Catalyn a day. Never a believer in mega-dosing on vitamin preparations, Lee’s philosophy was to give the body concentrated food as a nutrient source. That way, the body takes what it needs. A small amount of a food concentrate is more beneficial than a large amount of a synthetic or fractionated vitamin, which invariably disrupts body chemistry. Lee realized that any attempt to divine how many nutrients any given person needs at any given time would be foolish and futile. Your body was designed to get its nutrients from foods. If your diet doesn’t give it what it needs—and it doesn’t— then you require a food supplement, not a man-made synthetic, to fill the gaps and promote healthy function. For Lee, that meant three Catalyn a day.

Foundational Support
Catalyn is an excellent source of all the vitamins and trace minerals, though it doesn’t contain the major minerals—calcium, magnesium, and phosphorous—in sufficient quantity. Ideally, you should get these minerals from your diet. However, most Americans are deficient in calcium and magnesium, and the latter happens to be the most common mineral deficiency in America. For these reasons, any well-rounded nutritional program should include additional supplements for both of these important minerals.

Soon after Royal Lee released Catalyn in 1929, reports started coming in. Among those who took just three Catalyn a day, the results were extraordinary. Back then, access to junk food was nothing compared to what we encounter today. There weren’t as many hydrogenated oils or chemical preservatives in our foods, NutraSweet and McDonald’s were still far in the future, and rampant environmental pollution was only just beginning. The soil was richer, not yet depleted of its life-giving nutrients by industrial farming. That means three Catalyn a day, though useful, may not be enough for modern Americans. I take six a day, and more if I feel run-down.

After the success of Catalyn, Dr. Lee thought his job was done—that no other product was needed. But he soon realized that his work had just begun. Catalyn, though complete, simply contained “a little of everything.” Lee saw the need for more specific products. In 1930, he began development on a group of food concentrates designed to address the specific nutritional needs of people with a wide range of health problems. In 1967, Dr. Royal Lee passed away, but he left behind writings that are full of insights into health and illness that are far beyond what is widely known today. Indeed, Dr. Lee laid the foundation for what would eventually evolve into a group of more than 150 products based on the same philosophy that gave birth to Catalyn nearly 70 years ago. All Standard Process products are synergistic, just as foods are. Lee designed them to work in concert, as balanced as a well-prepared meal.

Reductionist Nutrition: Nutraceuticals
As a practitioner of Chinese medicine, it’s important that my approach to nutritional medicine is compatible with my approach to herbal medicine. High-dose synthetic drugs and/or vitamins are incompatible, because fractionated vitamins disrupt the delicate balance of micronutrients found in herbs and foods. Since we haven’t yet discovered most of the substances in herbal medicine, it’s impossible to get a clear grasp of how these phytonutrients interact with synthetics. Unfortunately, nearly every multivitamin available is a synthetic or fractionated vitamin product.

I used to be an avid fan of high-dose synthetic vitamins. Back then, I imagined that if I stopped taking the ”strong formula,” I’d have less energy. After all, how could three, or even six, small doses of Catalyn compete with the nutritional support provided by four huge pills, each one of which contained a vast amount of vitamins? The ingredients in Catalyn read like a grocery list, and the quantities of “stuff” listed on its label seemed unimpressive. Still, I wanted to find out. I stopped cold turkey, replacing my mega-vitamin formula with six Catalyn a day. To my surprise, I suffered no adverse effects. Instead, after a few weeks, my energy, endurance, and mental clarity improved. But perhaps I shouldn’t have been so surprised. All I did was replace the toxic burden of the synthetic nutrients and drugs with a wondrous concentration of ingredients  designed for my body—good food.

Today, we’re just starting to learn about the complex interactions that can result between two or more drugs. We know even less about how synthetic vitamins interact with each other, and with drugs. But no such complications are associated with Catalyn and similar products, because they are pure concentrations of ingredients given to us by Nature herself.

Researchers and practitioners who use synthetic or fractionated vitamins are right to worry, just as doctors and pharmacists do, about toxicity resulting from an overdose of their medicines. Synthetic vitamins are not foods, and they don’t have a nutritional or rebalancing effect on the body. Rather, their effect is pharmacological or drug-like. And like many drugs, they often produce fast and dramatic results, as well as imbalances in the body. Common sense says that too much of anything—even water—can be toxic. It’s also common sense to understand that foods have much less potential for toxicity than drugs or their cousins, high-dose fractionated vitamins. While many of Dr. Lee’s contemporaries were starting down the road of isolating and synthesizing nutrients, he took a different direction and sought to preserve them in their natural state. Catalyn was the first fruit of that labor. I’m thankful for Catalyn and its sister products, and recommend them to my family and patients.

Recommended Reading
The Real Truth About Vitamins and Anti-oxidants, by Judith A. DeCava, CNC

Dr. Michael Gaeta is an educator, clinician, and writer in the field of natural health care. His purpose is to create a world of vital, resilient people who find fulfillment through positive contribution, and who stay out of the medical system. Michael works with natural health professionals to improve patient care and practice success through his one-year clinicians’ mentoring program, live seminars and webinars, and distance learning programs. He holds licenses in acupuncture, dietetics-nutrition, and massage therapy, and he is a doctor of acupuncture in Rhode Island. 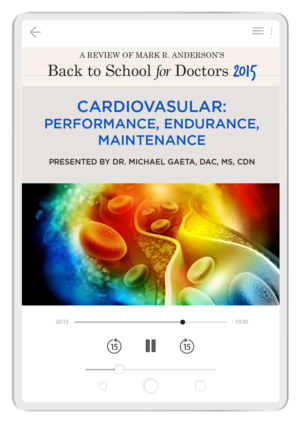 Back to School for Doctors Series

Cardiovascular: Performance, Endurance, Maintenance—A Review of Mark Anderson’s Back to School for Doctors 2015 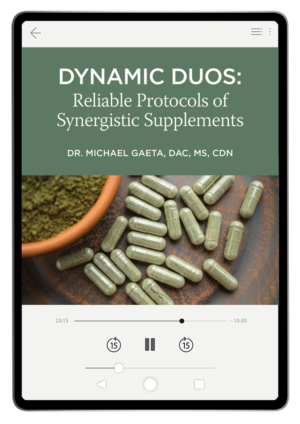 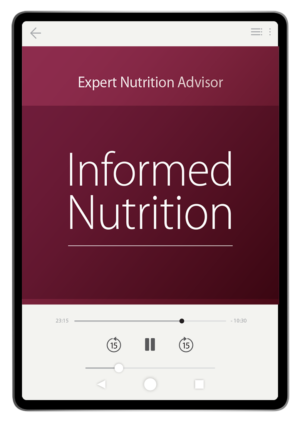 <strong>Dr. Michael Gaeta</strong> is an educator, clinician, and writer in the field of natural health care. His purpose is to create a world of vital, resilient people who find fulfillment through positive contribution, and who stay out of the medical system. Michael works with natural health professionals to improve patient care and practice success through his one-year clinicians’ mentoring program, live seminars and webinars, and distance learning programs. He holds licenses in acupuncture, dietetics-nutrition, and massage therapy, and he is a doctor of acupuncture in Rhode Island. For seminar information and publications by Michael Gaeta, please visit <a href="https://michaelgaeta.com/">Gaeta Communications.</a> <strong>Products by Dr. Michael Gaeta</strong> [products category="dr-michael-gaeta" limit="3"]

One thought on “High-Level Nutrition: An Introduction to Catalyn”